Let’s be honest, if you saw the Rialto in the state above, you would run the other direction.  Most did.  The corners of the roof were caving in, there was one string of fluorescent lights tied together and draped across the main space, and it was stuffed with old office and construction materials.  I walked in, through the entrance of the warehouse next door that is now Hidden Springs because the Rialto had no front doors, and through multiple unlit thresholds reminiscent of a number of horror flicks, and immediately started envisioning all the possibilities for the space and a floor plan that is almost what it became during our renovations.  Each day, I am focused entirely on the grind of running a small business with big ambitions, so taking a moment to look back at how far I have come as a business with this beautiful space, is gratifying.

I signed the largest stack of closing documents I have ever seen in October of 2013 but the same morning, roofing materials were already being delivered and the damaged roof removed.  There were at least 5 places where water was literally pouring into the building with buckets scattered through the attic and upper rooms.  The first week, the patched tar roof was replaced with a mechanically fastened, white vinyl, TPO surface.  If we didn’t waterproof the structure immediately, everything inside would be lost.

Every time I had visited the site, it was hard to even walk through due to the amount of stuff being stored inside and I asked the current tenant if they were really going to have it emptied by the closing day the week before.  3 days before. The day before.  In the rubble, I recognized a row of theater seats and asked for them to stay with the building. The tenant argued and made me believe they would be cleared with the other contents, until I arrived after the closing and the building was empty, except for the row of theater seats.  I sat in the seats staring at the arch, pretty quiet, somewhat in disbelief of the journey I had just signed up for.

The main space reno is obvious; dark walls with 90 years of grime got patched and fresh (almost) white paint, new LED lights throughout the ceiling where none existed, walls framed out to separate a gallery space, hallways, and offices.  The blue doors being installed in the solid block front wall has brought a lot of attention from events and photographers and inspired the hashtag #behindthebluedoors, along with the restoration of our most recognizable feature, the yellow brick facade.  What may not be as familiar to most are the previous condition of the bathrooms and other rooms behind the scenes.  Men: your bathroom did not exist except as a dismal storage room housing an old tattoo or medical chair.  I don’t want to know which or if it was ever used in the space.  Where the women’s bathroom is now was originally 3 separate, concrete stalls with a walkway between them into, the now, Hidden Springs brewery space.  In fact, there were 7 doorways between the two spaces that had to be closed up before our bank would close on the sale.  At one point in the renovation, we needed temporary bathrooms (actually for our wedding!) when there were what I call “Sochi-style” in honor of the stories from Olympian athletes attending the 2014 Winter Olympics in Sochi, Russia.  There were curtains on tension rods to form “stalls” and it was co-ed to the dismay of many family members.

The primary focus of renovations was to add lights, bathrooms, walls, and basic fixtures, therefore many items on our punch list have only recently been completed or are still in the works.  In April 2016 the building got AC in the main spaces for the first time in its 92 year history!  The original, 1924 water pump and valve for the fire sprinkler system, received a red makeover but just for decoration, as the old pump is now out of commission and replaced by a newer version about 1/10th of the size.  2017 has some fun projects in the works as we close out a grant received by the Hillsborough County Historic Preservation Challenge Grant Program but I will keep a lid on them until they are in.

Along the way, a few fun features have been uncovered.  In the attic space, 3 large metal letters (R, E, A) were discovered along with 3 of the 4 original white glass globes that were on the original awning.  At some point, I will decide where to install them along with the red water pump and approximately 100 sprinkler heads that were removed to make way for new.  Like owning an old house, the work will never be done.  There will always be new ideas and new projects, leading to bigger and better things for the Rialto Theatre.  Thank you for following and participating in the journey. 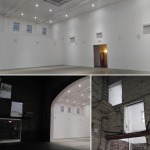 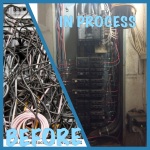 One thought on “Renovating the Rialto since 2013”