Tom Parker’s exhibition will be featured from March-April at the Rialto Theatre. Closing artist reception to take place on April 27th, 2018. 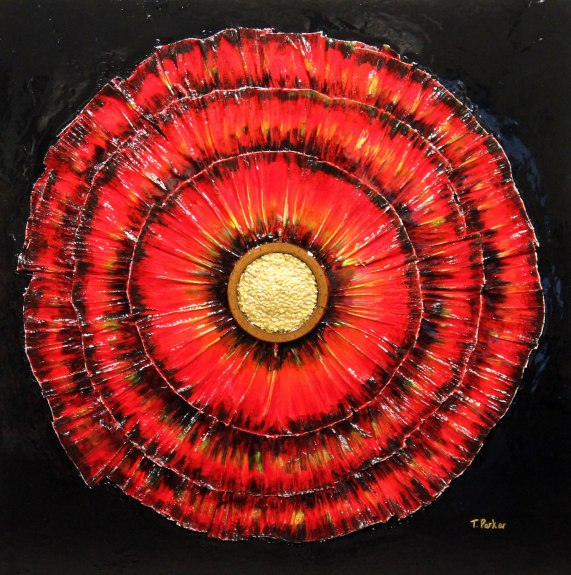 Tom Parker is a self-taught artist from a family full of creatives. Joe Sheldon, his uncle, helped curate the early art scene in Asheville, North Carolina. As a teenager, Parker would visit his studio where he would watch his uncle paint and craft frames. At the age of 14, Parker won his first national art recognition certificate. Today, he has been awarded several “Best In Show” Awards, showed at fine art galleries in South Florida and keeps a retainer of buyers and collectors from Europe.

Tom’s motivation to create and paint comes from everyday life. Sights, smells, conversations, especially when his everyday travels take him to another artist’s studio or gallery.  Before moving to Florida, his art would be described as traditional filled with landscapes and seascapes. Now, Tom concentrates solely on abstractism- large, textured, mixed media pieces that typically contain found objects from his travels. “Homeless Poets” incorporates items from his visit to San Francisco and speaking with the homeless. “Pont des Arts Bridge” is a painting started after his visit to Paris with wife and muse, Jeanne, which also features large amounts of mixed media collected from his travel.

While experienced in many mediums, Parker’s favorites are oils, acrylics, watercolor and encaustic (wax).  Two of his greatest learning moments were learning the proper technique for curing resin and successfully using acrylic on paper. When creating, Tom doesn’t get caught up in his own preconceived notions of what the final result looks like and prefers to allow the painting to take him on a journey. “The painting always lets me know when the journey has ended and the time has come to apply my signature.  Sometimes the journey is short and sweet and sometimes it lasts for years,” he describes.

Presently, he is working on a new series called “New World.” It will feature a new style that Parker has been experimenting with, called Gravity Enhanced Abstract, which requires the finished product hours to cure its many layers. “It’s a reflection of how the rapid world change is moving my and my style of artwork,” says Parker. Some pieces from this particular series will be featured in his first exhibit at the Rialto Theatre from March-April.

Before moving to Tampa, Parker worked in the biotech/pharma industry and helped start three companies; two of which are now publicly traded. He is most inspired by the work of Clyfford Still, enjoys golfing and fishing in his downtime and credits John and Theresa Frazee for guidance on his craft. He has four children and five grandchildren with his wife Jeanne.

For more information on his work, please visit Tom Parker’s website at http://tparkerart.com/